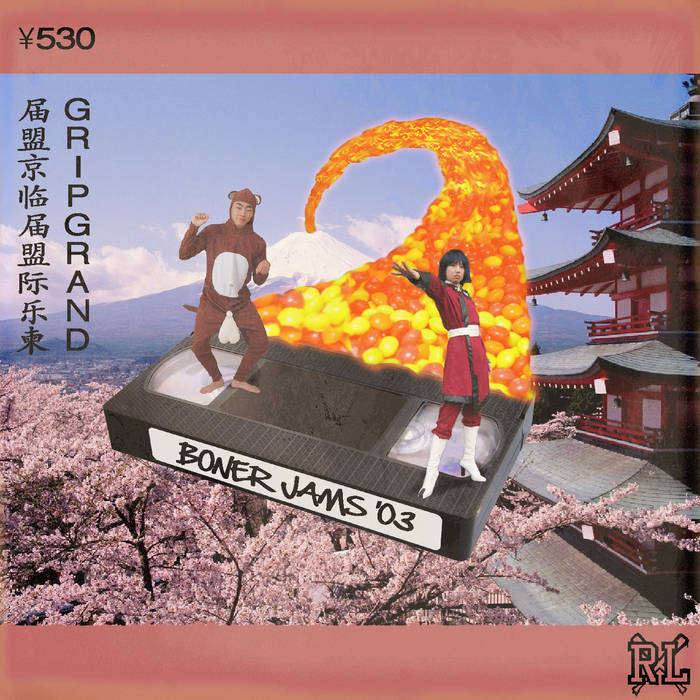 Danielle McBride followed by B-Side Too, Charmed I'm Sure, Rec It Like It's Hot and Rec-League For Life Favorite track: Don't Say Sh*t to Grip.

Every once in a while, life plays a hilarious joke on you, and the only decision you can make is whether or not to laugh along. This is one of those times. And so I say to life: “Good one, buddy. You got me.”

I have long intended to compile various verses from my vaults into some sort of “mixtape”…a selection of guest appearances, older non-album material, and unreleased or unavailable loosies. A little something special for the Grip Grand connoisseur or (rarer still) completist. Sounded like an OK idea to me. Well, I guess it sounded OK to someone else, too, because they beat me to the punch. On my own mixtape.

I know what you’re thinking; “What the f*ck is he talking about?” What I’m talking about, ladies and gentlemen, is the newest addition to the Grip Grand discography—the recently discovered, Japan-only, pressed-by-a-stranger, I-totally-have-no-idea-how-they-got-all-this-sh*t mixtape entitled Grip Grand—Boner Jams ’03. A friend of mine in old Nippon found this improbable dustcatcher lining the shelves of his local indie record shop, and he was totally dumbstruck by its existence. Unable to locate any information about its origins on the package, stonewalled by the shopkeeper, my friend had no recourse but to buy every copy he could find and immediately forward them to me stateside (thanks, Donnie). Having received his uncanny package, all I can say is “Wow”.

The cover depicts, I believe, some sort of eroticized squirrel-man gallivanting with a space-kilt-clad young lady on top of a flying VHS tape (labeled, appropriately, Boner Jams ’03). The tape appears to have been expelled with great force from the mouth a flaming Mount Fuji and carried through the sky with its capering cargo on a lava flume composed of what seem to be Skittles. All of which takes place over a field of roseate cherry blossoms and graceful pagodas. And despite all the words I just typed, it defies description.

Inside this insane package, you will find (as I did) a tasteful array of Grip Grand verses (including a number of previously unreleased original songs in their entirety), interspersed with quotes taken from an American film popular a few years back…something about an old virgin. At any rate, the chosen quotations often have a relationship to the surrounding musical material that might be described as tenuous, at best. Combined with the cover-art, it all adds up to a non sequitur of stupendous proportions, one which follows a remark I was evidently not privy to. Nonetheless, I gotta say…it’s kind of really, really dope. Really dope.

First off, the material is first-rate, if I do say so myself. Pretty much what I would have selected if I had been doing this project (and I would have been, if not for you meddling kids).

Second, the movie-quotes are hella funny, and sometimes they even sort of relate to the music. It creates a mood, a world if you will, that you can slip into and spend a comfortable 52 minutes with.

Third, it’s f*cking 52 minutes long, and it only features like one guest verse. I think that’s longer than my real albums! Sure, it has some excerpts from Rec-League Mixtape 2 (it even has the Rec logo on it), and you might already have those. But it’s fun to listen to old music in a new context, and if the context you want is “all Grip Grand, all the time” then this is the mixtape for you.

Fourth, and maybe most importantly, the cover is jaw-dropping and represents what I’m sure is some kind of next-level alien intelligence. Clearly, its origins are extraterrestrial, and I have a theory that this mixtape was created by beings from another world and subsequently exported to urban Japan—the only culture futuristic enough to deal with it.

And lastly, if all that wasn’t enough, let me quote a few lines from a one-page leaflet I found tucked into the third copy we opened (I think this was translated at some point, but from what language I’ll never know):

“Hey! Are you for the rap? You are courageous. Test yourself—while Grip Grand unleashes! Catalogue tape of high-excited songs includes featuring the following: Your favorite group singers—Gabriel and Richard! Do I hear more voices? Yes, it is the Recreational Men’s Team Champions!! And who has beat? We have the beat, and big names like Keith, David, Otis, and Dwight! There is no more terrific than Boner Jams ’03!! Are you the ear-virgin? Fear not—this tape will eradicate you! Top one!!”

Like I said before…f*cking, wow. I mean, what the jumping Jesus is that sh*t about? I don’t even want to know, because I think God is speaking to me through this mixtape. He’s speaking to you, too, Hip-Hop. And he’s saying, “Don’t take yourself so seriously, D-bag.” Or at least that’s how I interpret it. He also seems to be saying “Grip Grand is fresh to death”…because, seriously, DJ Japanese-Martian-Jesus killed it on this mixtape. Everyone else needs to step their game up.

So it is with great confusion and humbled awe that I (and DJ Japanese-Martian-Jesus) present Grip Grand—Boner Jams ’03, and may you be as deluded and delighted as I was when I first set ears upon it.

PS—Did I mention that it ends with the theme song from Everybody Loves Raymond? I’m not even joking…